Former Spice Girls singer Geri Horner gave a behind-the-scenes glimpse into her family life at the weekend as she shared a new photo of her daughter Bluebell Madonna.

The doting mum-of-two took to her Instagram Stories, where she uploaded the lovely picture.

The youngster wore grey leggings, a fuchsia top and a dark gilet, as well as a riding hat, and she seemed in her element as she smiled serenely at the camera. Geri captioned the image simply: “Blue,” alongside a pink heart emoji.

The Look at Me hitmaker is such a devoted mum, and took to her social media back in May to wish her eldest child a happy 16th birthday.

Sharing a series of family photos, the star wrote: “Happy birthday Bluebell! 16! We are so proud of you! The amazing person you are. “Watching you grow up is such a blessing. We love you Bluebell.”

Geri dotes on her daughter Bluebell and son Monty

Geri’s fans rushed to share their love for the message and the pictures, with many commenting on just how much Bluebell looks like her famous mum. One wrote: “Crikey, she is your double!!!! Happy birthday Bluebell!”

Another commented: “Happy birthday Bluebell aka mini mum,” and a third chimed in: “Geri u really said copy and paste!! A very happy birthday to Bluebell!!” 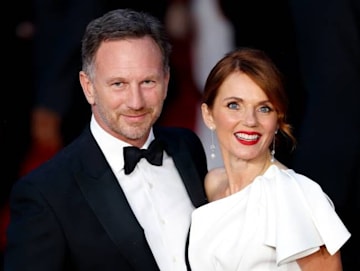 Geri and Christian married in 2015

It read: “Happy 16th Birthday Bluebell. Have an amazing day Bluey, we are all so proud of you and good luck with the GCSEs xx.”

Geri shares Bluebell with her ex-partner, Sacha Gervasi. She is also mum to son Montague (known as Monty), who she and Christian welcomed in 2017 after tying the knot two years previously.