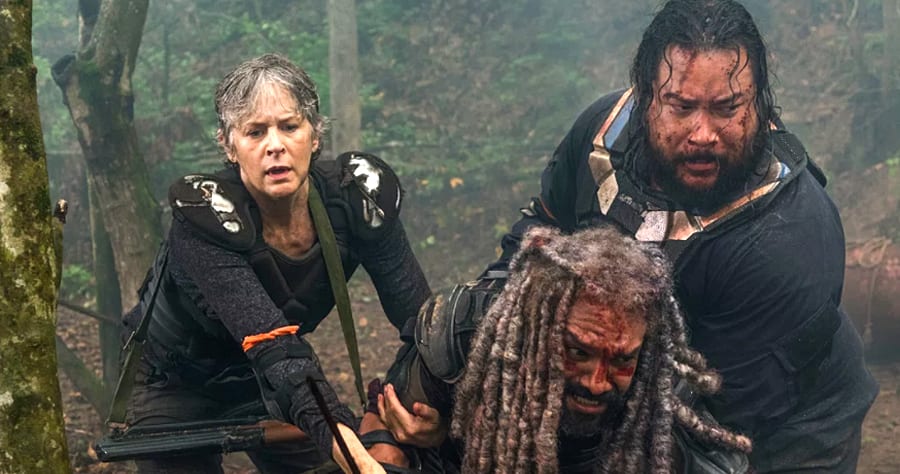 “The Walking Dead” Season 8 killed off “the real MVP.”

*Spoilers ahead from TWD Season 8, Episode 4, which aired Sunday, Nov. 12*

TWD regularly kills off people — and killed a lot of mostly unknown Kingdom residents in “Some Guy.” But it’s the death of a CGI tiger that had fans screaming NOOOOOOOOOOOOOOOOOOOOOOOOOOOO across Twitter.

Shiva, the loyal tiger companion of former zookeeper “King” Ezekiel of the Kingdom, was killed saving her papa and his friends, Carol and Jerry. Shiva was always clutch, like in the Season 7 finale last spring. But TWD is based on the comic book by Robert Kirkman, and Shiva did die in that comic book during this All Out War storyline. That said, plenty of other changes have been made over the years — including Carol and Judith still being alive when they both died back in the prison storyline of the comic. There was hope that TWD wouldn’t kill off the tiger. But there was also the CGI budget, among other practical considerations.

Fans were not happy to see Shiva go, comparing her death to losing Glenn last year. (Sorry, Eric. How quickly we move on.)

When you saw Shiva getting ate and you wanted to go in to help but you remember it’s a tv show #TheWalkingDead pic.twitter.com/TQ1SYO5Gea

Shiva literally gave up her own life to save the people she loves no one talk to me for a WEEK #thewalkingdead pic.twitter.com/5LmTxGH5Ag

He saved her, and then she saved him. RIP Shiva #TheWalkingDead pic.twitter.com/eYq34RHAFz

*Guy gets split in half: doesn’t blink an eye
*Shiva dies: what kind of sick show is this?!#TheWalkingDead

Person dies: OK it’s part of the show. I’ll get over it.

Animal dies: What the hell? What is wrong with you people??

Out of all the characters we’ve lost along the way…Shiva’s death hurt me the most #TheWalkingDead pic.twitter.com/OUamGBucSR

I didn’t cry this much when Glenn was killed and I am now sobbing over a Shiva. #TheWalkingDead pic.twitter.com/yHQVF1LuZh

rip to the real mvp of #TheWalkingDead pic.twitter.com/3swTLsPsjA

You can say Shiva🐯 wasn’t real, but these feelings are real 😭😭😭😭 #TheWalkingDead #TalkingDead pic.twitter.com/eaQ18OQzoV

Yes, it’s like losing a “Game of Thrones” dragon or direwolf all over again.

“[T]o me Shiva is kind of the embodiment of what the Kingdom is to Ezekiel. She is this rare, beautiful creature that somehow is surviving and thriving in this dark and hellish place, and that’s what the Kingdom is. It’s this bright, beautiful thing that he was able to build despite all of the death that’s rotting around him, and I think that moment is kind of the embodiment of seeing Shiva. In my mind, it just replayed everyone dying on that field, but the incredible loss that you feel when you lose so many so abruptly and so harshly. And so that, to me, was the connecting sinew that I was able to find in my brain to have that emotional connection. And another gut-wrenching scene to watch, good gracious.”